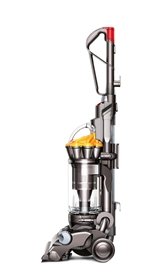 Conventional vacuums rely on bags to trap dust and dirt. But when you start to use some bagged machines, dust can clog the tiny holes in the bag. Some ordinary bagless vacuums work in a similar way. They use a central filter to trap fine dust, which can clog too. Suction drops, leaving dust and dirt behind in your home.

Dysonâ€™s patented Root Cycloneâ„¢ technology doesnâ€™t rely on a bag to trap dust and dirt. Instead, it spins the air so fast that centrifugal forces up to 100,000 times the force of gravity fling dust and dirt out of the air and straight into the clear bin. And that includes the fine dust that can restrict airflow in some ordinary bagless vacuums. Unlike some other vacuums, Dyson machines don't lose suction.

The wand has been re-engineered to give a longer reach. The wand and hose extend 15.7 ft in total to clean high places and hard to reach areas. Tools click-fit to the end of the wand to give even more cleaning options.

Ordinary vacuums canâ€™t always retain all the dust they remove â€“ so some of them vent some of it back into your room in the air they expel. Thatâ€™s the reason for the dusty, electrical smell. Dyson cyclones can capture microscopic particles such as pollen, mold and bacteria.

Emptying the bin on a Dyson vacuum is quick and hygienic. Just press the button to release the dirt. The bin is clear, so you can see when it needs emptying â€“ and how much dust, dirt and pet hair the machine has captured. Dyson vacuums were the first to have clear bins â€“ despite market researchers insisting it was a bad idea. Now clear bins are everywhere (though not all are made from the same ABS polycarbonate as riot shields, like Dyson bins).

Dyson cyclones are able to extract microscopic particles including common household allergens such as pollen and mold. But thereâ€™s also a HEPA filter as an extra precaution for people with asthma and allergies. It wonâ€™t need replacing â€“ just give it a wash according to the instructions that come with the machine.